Beginning and Intermediate players of the double Bass will join the North Texas Bass Camp for four days of fun, participation and instruction. Playing, practicing and performing will abound and students will enjoy the week-ending game of “Double Bass Jeopardy” and perform in the Grand Finale Concert.   Participants will have the opportunity to work with outstanding teachers Dr. Gudrun Raschen  – University of North Texas, Dr. Jessica Gilliam – Southwestern University and Dr. Carlos Gaviria – Stephen F. Austin University.

Arrival – Departure: Registration/check-in will be at 6 pm on Monday, June 18 and the final concert ends at approximately 9:15pm on Friday, June 22. If necessary, students may stay overnight Friday night and depart on Saturday morning. Underage supervision and assistance is provided at all times. 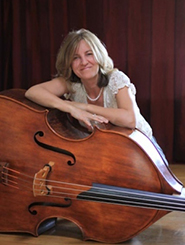 Gudrun has performed in early music concerts on double bass and baroque cello with the Denton Bach Society, the Orchestra of New Spain, Texas Camerata, Fantasmi, Fleurs de Lys and at the Boston Early Music Festival with Collegium Musicum, She is an active freelance musician and has performed with orchestras including: Cape Town Philharmonic, Natal Philharmonic and in the US with the Fort Worth Symphony, Dallas and Texas Chamber Orchestras, Richardson Symphony, Wichita Falls Symphony and the East Texas Symphony. Gudrun studied cello with Eugene Osadchy and double bass with Jeff Bradetich and received her Doctorate in double bass performance at the University of North Texas in 2009. She is currently an Adjunct Professor at UNT and Texas Woman's University and is the founder and teacher of the Bass and Cello Conservatory of Dallas where she holds group lessons for beginners through advanced players focusing on collaborative learning, performance and chamber music. 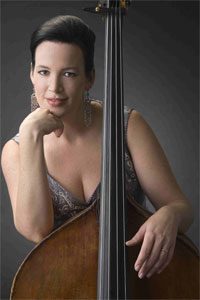 Jessica Gilliam-Valls: double bassist, cellist, recording artist, producer, educator, wife and mother.  The Austin-native musician exemplifies the ubiquitous artistry of a true music lover, heeding to no one genre, discipline, or stage. Ms. Gilliam-Valls studied at The Oberlin Conservatory and went on for a Masters of Music in Double Bass Performance at the Manhattan School of Music and now a Doctorate of Musical Arts at the University of Texas at Austin. She has shared the stage with a dozen orchestras including the Austin Symphony Orchestra, San Antonio Symphony, Austin Lyric Opera Orchestra, Tosca Tango Orchestra, and Orqestra da Radio e Televisao Cultura in Sao Paulo, Brazil where Ms. Gilliam-Valls was principal bassist. She has appeared regularly with chamber ensembles, tango and bluegrass bands, in studio recording sessions, on film soundtracks, television and radio jingles, and popular festival stages around the world. She is presently a faculty member at The Austin Chamber Music Center, The Girl’s School of Austin, and Huston-Tillotson University. An invited performer at the 2007 and 2009 International Society of Bassists Convention, she is a regular guest artist and clinician at the North Texas Bass Camps, the Austin Chamber Music Workshop  and the Oklahoma Summer Arts Institute, among others.

Carlos Gaviria currently serves on the faculty of Stephen F. Austin State University where he teaches Double bass and Music Theory. A native of Cali, Colombia, Carlos began his musical education at the Conservatorio Antonio Maria Valencia. While in Cali, Mr. Gaviria joined the Orquesta Sinfonica del Valle, where he spent three seasons performing as a bass section member.

Gaviria came to the United States on a scholarship to study at the University of North Texas, where he completed the B.M. and M.M. While at UNT, he worked as a teaching assistant to the world-renowned bass teacher Jeff Bradetich. He is currently a doctoral candidate in double bass performance at the University of Houston, where he studies with Dennis Whittaker.

Gaviria is currently a member of Symphony of South East Texas and has performed regularly with many ensembles, including the symphony orchestras of San Angelo, Abilene, Irving, Plano, University of North Texas, and University of Houston. He also has been a member of festival orchestras, including the AIMS orchestra in Graz, Austria, Cali de Camara, Colombia and the Texas Music Festival Orchestra.

Gaviria is a dedicated pedagogue and was active as a bass instructor in the Dallas and Houston areas for several years; many of his students have been placed in All-State orchestras and have gone on to be accepted into music programs at major American universities. He has taught at the Abilene Summer Music Festival and at the Bradetich Annual Summer Bass Camps since 2009, and he has presented master classes at UT Panamerican and Universidad del Valle in Colombia . Additionally, Gaviria has taught music theory and ear training classes at the University of North Texas and the University of Houston. He currently resides in Houston, where he maintains a full private teaching studio.

For more information, click on the links above for printable flyer or camp registration form, or contact Bass Camp Coordinator at untbasscamp@unt.edu.